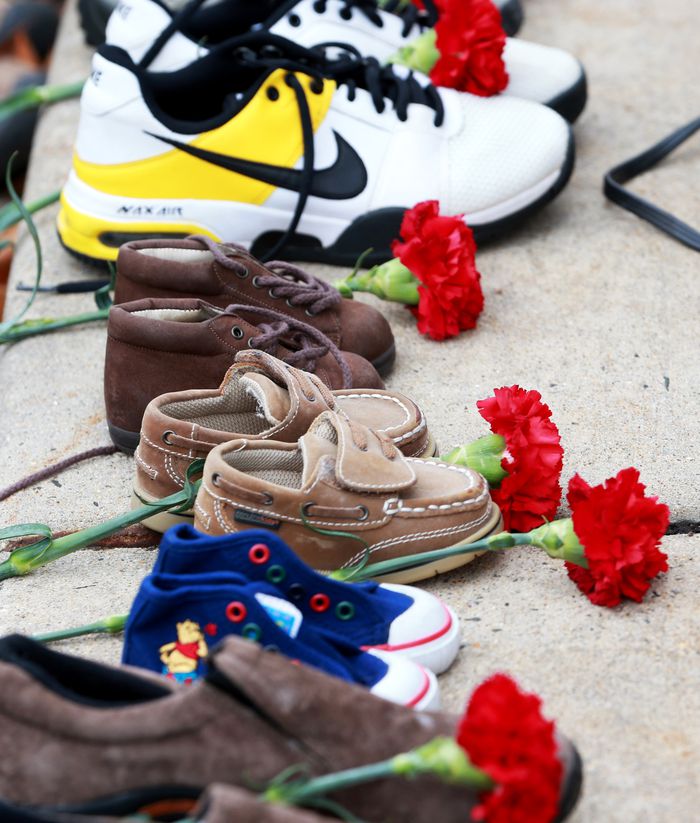 The shoes, 100 pairs in all, spoke volumes in their silence.

Advocates of Vision Zero, an ambitious plan aimed at eliminating all traffic-related deaths in New Jersey by 2030, gathered in Metuchen on Sunday to commemorate World Day of Remembrance for Road Traffic Victims.

About one-third of those killed are adults and children walking or riding their bikes, according to the Nikhil Badlani Foundation.

Wendy Kukowski was among the speakers at the 11 a.m. ceremony. She discussed losing her life partner, Oscar Zanoni, 44, who was riding an electric bicycle in Edison Jan. 2 when he was struck and killed by a tractor-trailer.

“On that day, Oscar became a statistic. He was one of the state’s 600 New Jersey and and 40,000 Americans who die on our roadways each year due to preventable traffic violence. But Oscar is, and always will be, much more than a statistic. He’s the love of my life, my soulmate, a ‘doggy dad,’ a son, a brother and a friend,” Kukowski said.

Kate O’Connor spoke of losing her brother, Jimmy, two years after he was struck coming home from work by someone she described as a “speeding, distracted driver.”

Her brother sustained a traumatic brain injury and was unable to walk, talk or eat on his own.

“He was my best friend. He was supposed to walk me down the aisle. He would have done anything in the world for me, and he would have been the best dad. And I had to watch him die,” O’Connor told the gathering.

“My family was helpless, and it continues to destroy us, seven years later,” O’Connor said.

Sangeeta Badlani is founder of the Nikhil Badlani Foundation, named in memory of her 11-year-old son, Nikhil. She was the first speaker at Sunday’s ceremony.

“We believe the only acceptable number of people who die on New Jersey roads is zero. That number today, year after year, is nearly 600. Look at the 100 shoes here. Imagine six times as many people who didn’t make it home,” she said at the ceremony.

“This is an issue that can impact anyone,” she said when reached by phone afterward.

In June 2011, Nikhil was in the back seat of a car, wearing a seat belt, being driven home by his father, when he died in a 3-car crash in South Orange precipitated by a driver who went through a stop sign.

Badlani told NJ Advance Media that the driver was issued two summonses, for reckless driving and not stopping at a stop sign, and paid $206 in fines.

In speaking with groups, she said she discusses “what Nik would’ve been like, how we don’t get to hug him.”