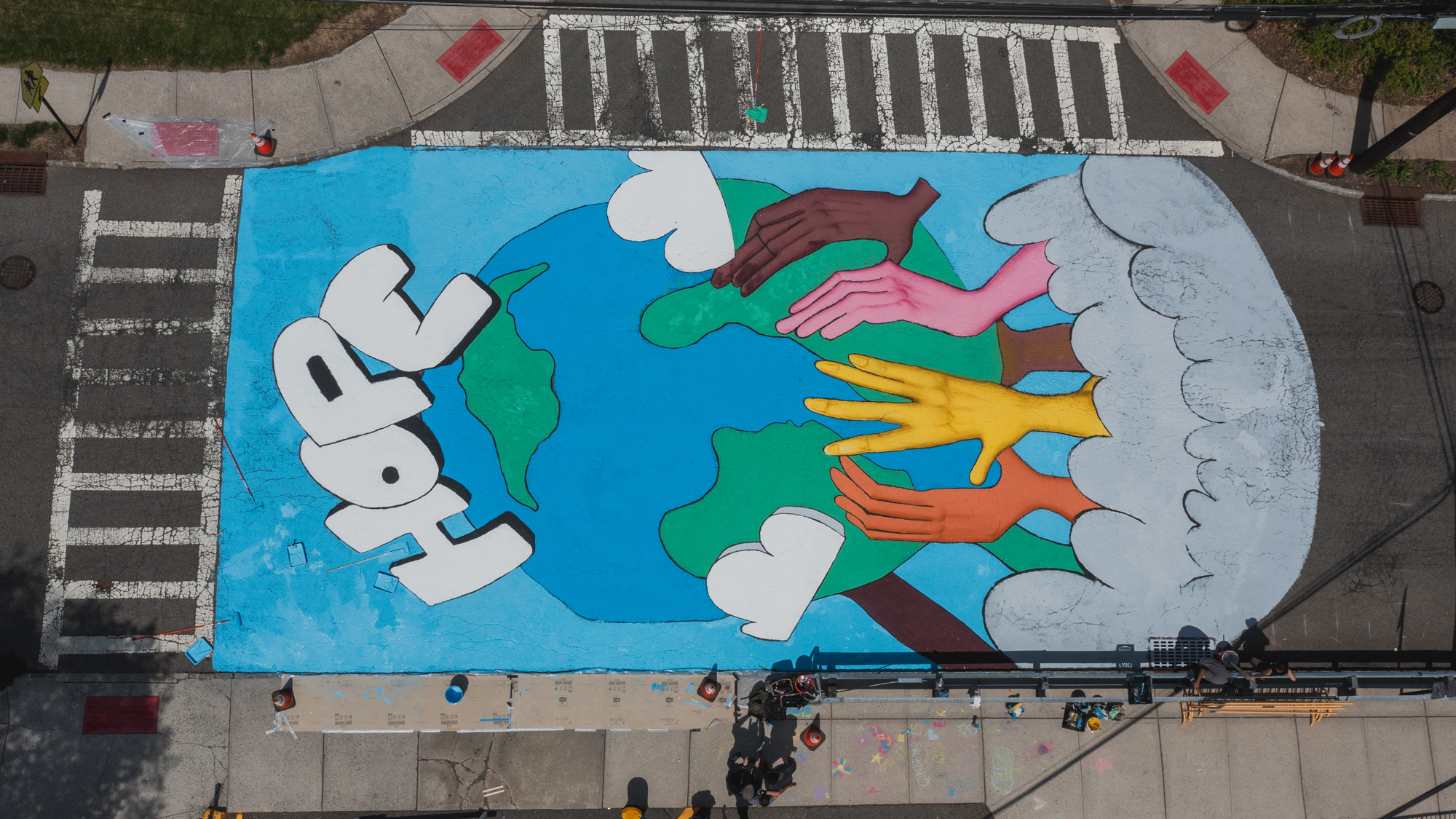 In addition to painting the mural, the event, which was organized by the Traffic Safety Youth Advisory Board, included educating the public about the newly passed Safe Passing Law, bicycle safety skills and bike-riding classes by EZ Ride; a performance by the Royal Strings Orchestra from WOHS; face painting; and a food truck.

“We wanted to do a project that would make our street safer as well as engage the community,” Traffic Safety Youth Advisory Board President Anay Badlani said.

The concept for the art came from an arts student at WOHS and Elijah Minton, an up-and-coming urban artist known as the “Art Alchemist,” was commissioned to execute the project. The mural, titled “Hope,” depicts people of all races working together for a better future.

In recent years, street art, also known as asphalt art, has become a popular method to improve public safety. In a new report from Bloomberg Philanthropies, researchers analyzed the impact of street art on crashes and found that it reduced crashes involving vulnerable road users by 50 percent and overall crashes by 17 percent.

“The township of West Orange is grateful for the ongoing work of the Nikhil Badlani Foundation and the Traffic Safety Youth Advisory Board in raising awareness for safer driving,” Mayor Robert D. Parisi said. “The engagement of the community regarding the painting of this street mural is just the latest example of the outpouring of support for the cause. It however is more than just street art as it conveys an important message that resonates hope far beyond the street corner where it sits. It will hopefully inspire not only the students of Hazel Avenue Elementary School but everyone who sees it to carry the message of hope forward for another generation.”

“It is such a pleasure to be part of the Hazel Avenue Street Art Committee with the Traffic Safety Youth Advisory Board and the Badlani Foundation working on the planning and prepping for months with the West Orange High School urban art teacher, Nicole Krulik, and students on the design — only to have WOHS graduate and professional muralist and ‘Art Alchemist’ Elijah Minton transfer the vision to the street,” Township Council President Susan McCartney said. “I just wish I could have been there on Monday morning when the Hazel Avenue Elementary students and teachers arrived to see the weekend’s worth of artwork.”

“The street mural represents what has always been a rallying point for our entire town since the tragic circumstances befallen upon the Badlani family,” West Orange Police Chief James Abbott said. The Nikhil Badlani Foundation was founded by Sangeeta and Sunil Badlani to promote roadway safety and music education after their 11-year-old son Nikhil Badlani was killed when a driver ran a stop sign and hit his family’s car. “The mayor and Town Council, along with town officials and the West Orange community, have always stood behind efforts to support the Nikhil Badlani Foundation and the Traffic Safety Youth Advisory Board to raise awareness in hopes of preventing a similar tragedy from happening to someone else. This latest community project is a shining example of something positive spawning from any parent’s worst nightmare. It truly delivers a message of hope and holds promise to potentially save an untold number of lives by raising pedestrian safety awareness for our community and beyond.”

“I am so grateful that my students had the opportunity to be part of this incredible event,” Krulik said. “Civilizations are understood by the public art they leave behind. We in West Orange are creating a record for current and future residents to illustrate what we care about and what’s important to us as a community through our public art projects.”

“Congratulations to the Traffic Safety Youth Advisory Board for finding a creative method for traffic calming. This project brings art and life together,” Sangeeta Badlani said.

The project was sponsored by the Nikhil Badlani Foundation and funded through a grant from State Farm.