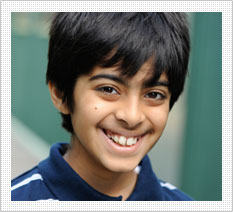 By JACKIE GOLDMAN-SCHATELL on August 6, 2015
TAP into Livingston

RANDOLPH, NJ – A little more than four years after 11-year-old Nikhil Badlani of West Orange was killed in 2011 by a distracted driver who ran a stop sign, “Nikhil’s Law” was signed into law by Gov. Kim Guadagno on Aug. 4, in Randolph, NJ. The goal of the law is to hopefully prevent something similar from happening to someone else in the future.

“While no one gets behind the wheel and says, ‘I want to kill someone,” said Nikhil’s father, Sunil Badlani at the press conference, “the minute you drop your guard and drive distracted, a killer you become.”

“Like the Badlani family, I wish I didn’t need to be here today,” said Guadagno. “We all wish we could prevent every car accident, every serious injury, every fatality. We know that we can’t, but that doesn’t mean we won’t try. A moment of caution can make all the difference. This bill will send Nikhil’s message to not just our youngest drivers, but all of our drivers. And, hopefully, the Badlanis’ tragedy will help prevent other families from enduring such hardships.”

The law (A-1781), which was sponsored by Assembly Democrats John McKeon, Charles Mainor, Mila Jasey, Benjie Wimberly and Shavonda Sumter, and unanimously passed through the state Assembly and Senate, requires the Motor Vehicle Commission (MVC) to expand the driver’s license examination to include a question asking applicants whether they are aware of the dangers of failing to follow the state’s motor vehicle traffic laws and whether know that they have the option to take the “STOP for Nikhil” safety pledge.

“For every young person, becoming a licensed driver is a major milestone that warrants celebration, but it also demands a greater sense of awareness of how one’s actions can affect others,” said Jasey (D-Essex/Morris). “This will remind new drivers that they have a duty to follow the rules of the road and exercise greater vigilance when they’re behind the wheel.”

“Having seen so much potential in so many young people as a teacher, a father and a football coach, knowing that Nikhil’s family and the West Orange community lost a child with great promise in this tragic way just breaks my heart,” said Wimberly (D-Bergen/Passaic). “For the safety of individual drivers as well as entire neighborhoods across New Jersey, it’s critical that we take the time to educate our youth on traffic safety.”

“This is a simple step we can take to emphasize to our young people that driving comes with responsibility,” said McKeon (D-Essex/Morris). “The more we can highlight that point, hopefully the more our young drivers will put safety first.”

“Driving is a big responsibility,” said Mainor (D-Hudson). “Emphasizing the need for safety is always a good thing.”

“For new and experienced drivers alike, operating a vehicle requires one’s undivided attention at all times, and it’s important that we make sure young people understand that as soon as they learn to drive,” said Sumter (D-Bergen/Passaic). “This will emphasize the need to be safe while on the road.”

Nikhil’s Law requires the MVC commissioner, in consultation with the Nikhil Badlani Foundation, to include information in the MVC driver’s manual explaining the dangers of failing to follow the state’s motor vehicle traffic laws.  This information must provide interested drivers with instructions on how to take the “STOP for Nikhil” pledge. It also requires the commissioner to ensure that drivers have the option of taking the pledge by filling out a standard form made available at MVC offices or by following instructions on the appropriate website.

Aside from Randolph police and township council members, the Morris County Sheriff’s Office and elected officials, AAA was also at the press conference to show their support for the bill. Following the event, the AAA sent out a press release that including AAA’s remarks at the bill signing of Nikhil’s Law.

“There is nothing more important to AAA than roadway safety and preparing our drivers to be safe on the road,” said the press release.

Too often driving becomes a secondary activity—we are focused on a phone call, a text, planning what we are going to say at our meeting or worrying that we are late for our next appointment, according to AAA. “This bill serves to remind all drivers that when we are behind the wheel that should be our number one priority—getting from point A to B safely, not just for us but everyone we share the road with,” said AAA.

According to the AAA, in a two-year NHTSA study of the nearly 10,000 fatalities that occurred at traffic signals, 20 percent of vehicles had failed to obey the signal and 13 percent had failed to yield the right of way. Doing so not only puts the driver at risk but everyone else who relies on those signals to determine traffic patterns. This means that nearly one third of all fatalities at traffic signals could have been prevented if the driver had merely followed the STOP for Nikhil Safety Pledge”:

The AAA also said that a study by the Insurance Institute for Highway Safety found that of the 700,000 crashes that occurred at stop signs over a four-year period, 70 percent of them were caused by stop sign violators. These violators were people who didn’t see a sign because they were in a hurry or distracted or who rolled through a stop because they knew that intersection. In addition, young drivers were disproportionately represented among those violators—which is why today’s law is so important, according to the AAA.

“Impressing that message onto young drivers when they learn will help build a lifetime of safe driving,” said AAA.

The AAA thanked the Governor, the Lt. Governor and Legislature for passing this bill, and the Badlani family for their “tireless advocacy.”

“They choose to use their voices in the hope that no one would have to suffer their same loss, said a representative for the AAA.”

“I’m sure Nikhil is smiling down right now and happy to see progress,” Sunil Badlani said. “But something tells me he’d rather be here witnessing this bill being signed.”

The pledge reads as follows:

“In order to ensure the safety of others on the road, passengers in my car, and myself as a driver, I pledge to obey traffic laws while operating a motor vehicle, be extra cautious, and be attentive to traffic signs and signals and road conditions. Specifically:

“I will stay alert, keep two hands on the steering wheel whenever possible, and keep my mind on the road;

“I will talk safely by using a hands-free wireless telephone while driving if I am of lawful age to do so and refrain from texting while driving; and

“I will plan ahead and leave enough time to arrive at my destination.”

The Fifth Annual STOP For Nikhil Run/Walk is being held by the Nikhil Badlani Foundation, on Sept. 20, at West Orange High School to raise traffic safety awareness. To learn more, participate or donate, click HERE.