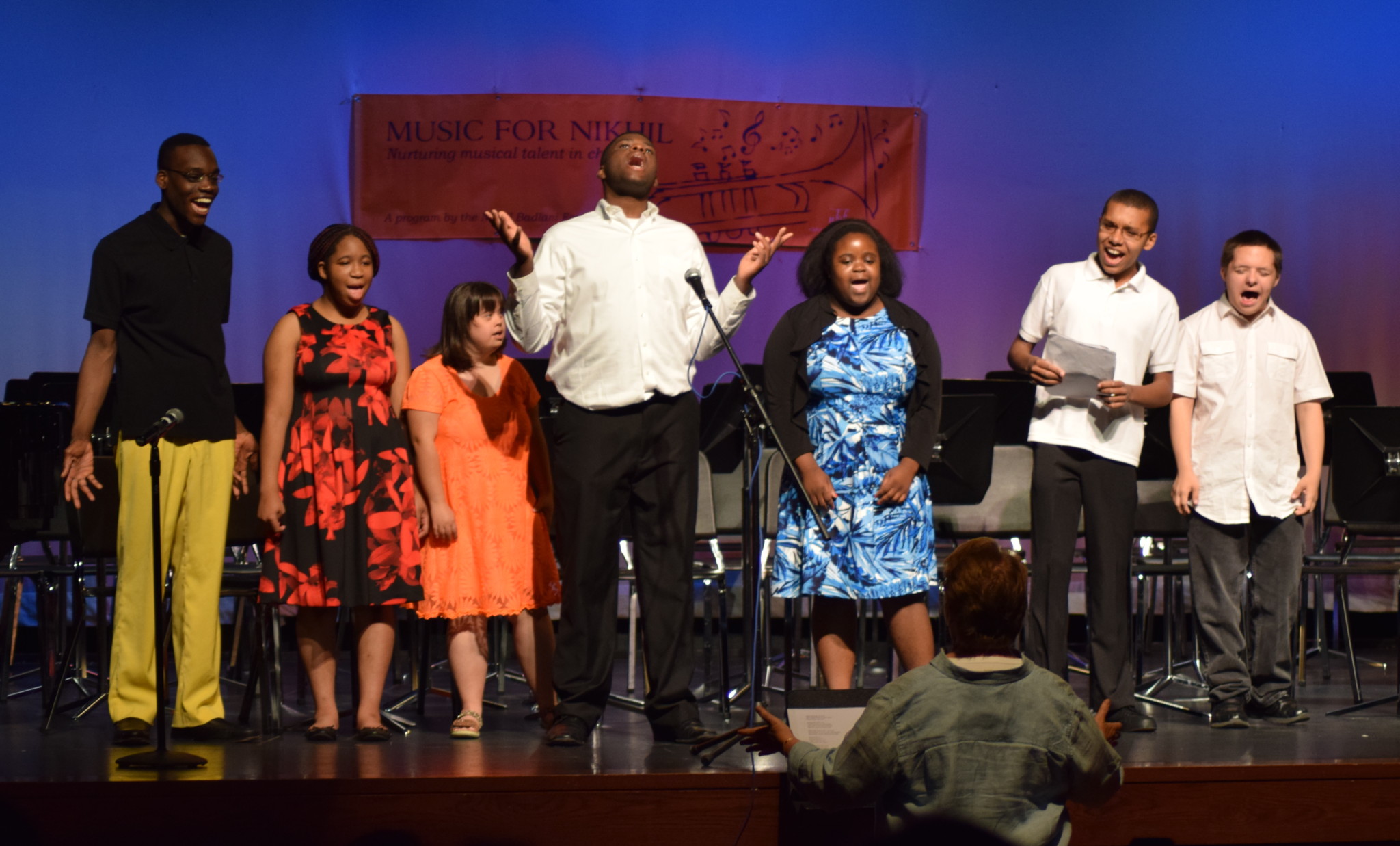 Dozens of music students taking lessons through the foundation’s Music for Nikhil program showed off what they have learned with an eclectic range of songs. From Nikhil’s younger brother Anay’s opening performance of “El Zapateado” on piano to the programwide rendition of Michael Jackson’s “Man in the Mirror” that closed the show, the concert offered something for every musical taste. And the packed auditorium responded with enthusiasm, clapping along during some numbers and giving standing ovations throughout the evening.

This year’s show was dedicated to Mackenzie Fitschen, a West Orange High School student who died of a rare form of cancer earlier this year. But as always, the performances also honored Nikhil Badlani, the 11-year-old West Orange resident killed in a car crash five years ago. According to his parents, Sangeeta and Sunil Badlani, Nikhil held a deep passion for music during his short life. When he was not listening to his favorite pop stars like Adele and Lady Gaga, he was regularly playing his trumpet and even practiced the piano every morning. In fact, he was learning a new selection on the piano just hours before he died.

So when the Badlanis launched their foundation for traffic safety awareness, they knew they also wanted to include a music component. And after watching so many of the program’s students thrive at concerts like the Tribute to Nikhil, they believe their son would be proud.

“He loved music so much,” Sunil Badlani told the West Orange Chronicle in a June 12 phone interview. “I’m sure seeing the joy of music that the other students experience would put a smile to his face.”

Sangeeta Badlani said Nikhil was instrumental in creating the format of the music program — she said they were inspired after remembering their son once lament that a talented friend was financially unable to pursue music education. Music for Nikhil seeks to remedy that situation by offering free and reduced price music lessons to any middle or high school student with a little experience and a lot of passion for performing. Currently, she said 65 students are taking advantage of the opportunity to learn from expert instructors in small groups. They also have the rare chance to perform at major venues such as the New Jersey Performing Arts Center in Newark.

And the program has been successful in its few years of existence. So far, Sangeeta Badlani said she knows of at least two former students who are now studying music in college. Plus, she said she has heard from numerous parents thanking her for giving their children an opportunity to learn music when it would not otherwise be possible.

“When it comes to making the choice between the necessities and music, music is probably the last thing that they’d be able to spend money on,” Sangeeta Badlani told the Chronicle in a June 12 phone interview. “This allows them to cultivate and develop the skills of their child.”

The students themselves are also immensely grateful. Tenor saxophonist Paulo Rojas said participating in the Music for Nikhil program for the past five years has definitely improved his musical skills. His teacher, Virginia Mayhew, has been an excellent source of musical guidance, Rojas said, and having the opportunity to perform in jazz clubs like Hat City Kitchen would likely not have been possible without the foundation. Plus, he said he has become close friends with his fellow students.

Above all Rojas said it is an honor to play for Nikhil, who was one of his best friends. The WOHS junior remembered him as a very happy person whose joy for life could be seen in his music. And Rojas was eager to share in that art for the tribute concert.

“Getting to perform in honor of him, having known that he would have been such an amazing musician, is amazing,” Rojas told the Chronicle prior to taking the stage.

WOHS junior Bibiane Marc also was happy to play for Nikhil, telling the Chronicle that it is a tragedy that someone so talented was taken so young. Marc said she got to know Nikhil well while rehearsing for a school play they were to star in prior to his death. She recalled that he was enormously funny, to the point that his jokes would have children rolling on the floor and crying from laughter. She said it was a devastating shock to learn that he had been killed not long after telling him that she would see him at the next rehearsal.

To launch Music for Nikhil in the wake of such tragedy was very generous of the Badlanis, Marc said. And she is thankful for the program, saying that it has changed her outlook on her musical ambitions.

“I never really thought I was good enough to play the flute seriously, but now it’s a consideration,” Marc said before performing a solo during the show. “Now I’m so comfortable with my flute sometimes I’ll even sleep with it — it’s like my pillow near me.

The instructors themselves have also benefited from the program. Deb Rees, who gives vocal lessons to the program’s special needs students, said it feels great watching her singers improve over time and gain confidence in their performing abilities. She added that she is proud to be part of a program that provides an opportunity for all young people to show off their talent and experience the joy of music.

“I’m very, very happy to be part of this,” Rees, who teaches music at Kelly Elementary School, said before the concert. “I love working with these students. It’s my privilege to be able to help them grow and develop. And I love to see how happy they are to be able to express themselves.”

Rees’ students were certainly a hit during this year’s show. Performing three numbers that they helped pick out — “They’re in high school, so of course they’re very opinionated,” Rees joked — the students sang with sheer joy and performed a choreographed dance routine for the upbeat song “All for One” from the television movie “High School Musical 2” to standing ovations.

But the benefits of Music for Nikhil extend beyond the program itself. WOHS band director Lew Kelly said he has seen a great improvement in his students who participate as they expand their musical knowledge and build their confidence. On top of that, Kelly said taking part in the program has shown them the fun of playing music with skilled fellow musicians.

Overall, Kelly said he respects the program for allowing students to embrace an art form that breaks down barriers and creates camaraderie.

“I think it’s important for anyone to have music as a part of their life,” Kelly told the Chronicle prior to performing a Stevie Wonder medley with the faculty ensemble. “Music enriches everyone’s life.”

Foundation board member and musician Andy Adelson agreed that the program offers a rare opportunity to learn extensively from experts in a setting unlike any classroom. Adelson said that since the class sizes are so small — three students or fewer — students receive detailed critiques on technical aspects of performing from musicians who actually specialize in their instrument.

Of course, the program would not be possible without the commitment of the Badlanis. Fellow board member William Yarzab praised Sangeeta and Sunil Badlani for their willingness to sacrifice their own time to help others. And to do so much shortly after the death of their son speaks to the kind of people they are, Yarzab told the Chronicle.

“It amazes me how a family that has suffered such a tragedy can make such a positive out of it,” Yarzab said.