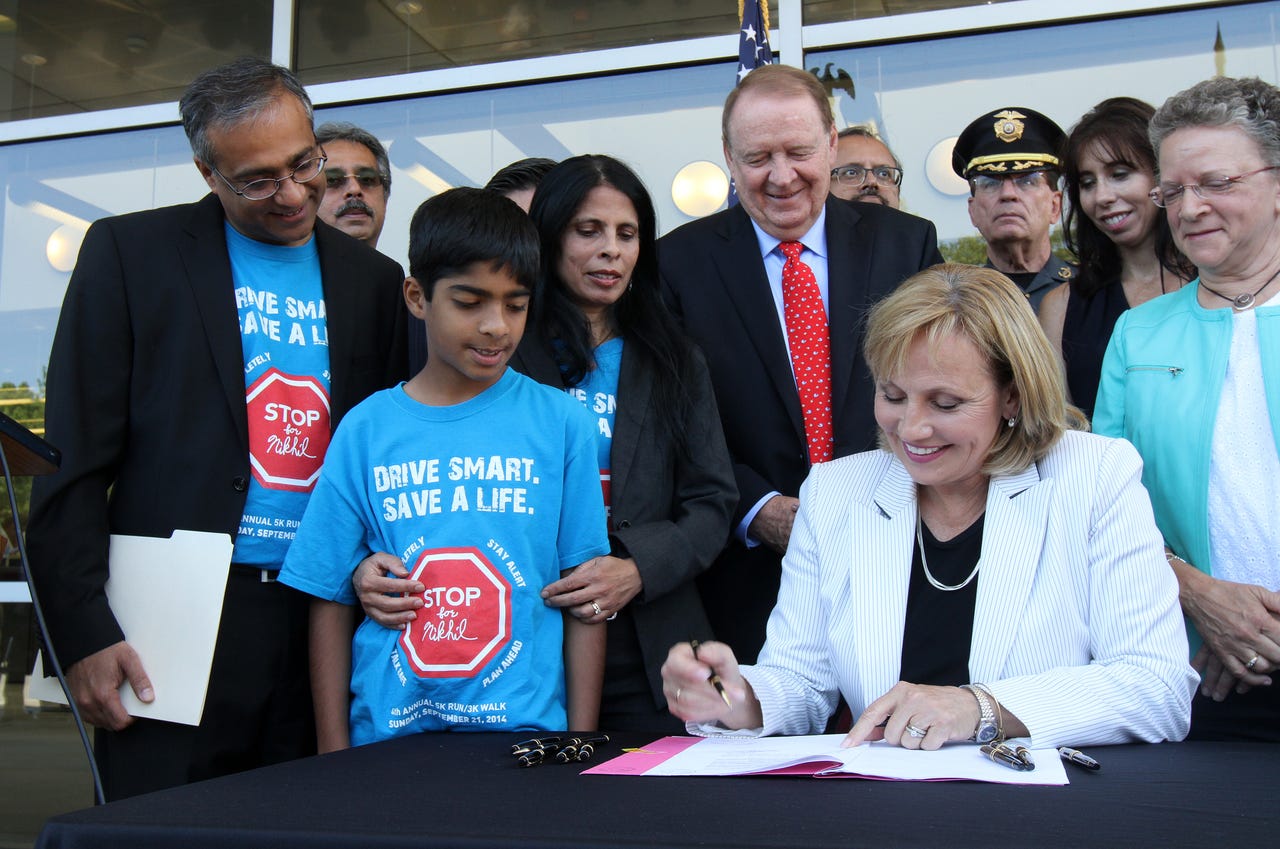 WEST ORANGE, NJ — Advocates in New Jersey are urging local leaders to step up their important work to reach Vision Zero — zero traffic deaths and severe injuries — in light of the recent release of a groundbreaking report setting a goal to eliminate traffic fatalities in the United States by 2050.
The report, “A Road to Zero: A vision for achieving zero roadway deaths by 2050,” is the first of its kind in the country and was developed by the RAND Corporation, a nonprofit, nonpartisan research institution, in partnership with the Road to Zero Coalition, which is led by the National Safety Council and includes the U.S. Department of Transportation among other influential partners.

This historic call for action and urgency at the national level comes as traffic deaths reach staggering proportions, as more than 37,000 people lost their lives last year in the United States in traffic crashes — an average of 100 people lost each day in preventable crashes. In New Jersey, the number is 626, a 4-percent increase from 2016 and an 11-percent increase from 2015. Traffic fatalities have been on the rise in New Jersey. Jersey City Mayor Steve Fulop recently signed and adopted the Vision Zero initiative, adding Jersey City to a list of more than 30 U.S. municipalities that have employed traffic safety strategies. The order establishes a 13-member task force charged with creating a comprehensive plan to eliminate car crashes that result in fatalities and severe injuries by 2026.

“The Nikhil Badlani Foundation commends Mayor Steve Fulop and his team for Jersey City’s early- adopter of Vision Zero and for recognizing the responsibility our city has to ensure that community members can walk, bike, drive and take transit safely to move about in Jersey City,” NBF President Sangeeta Badlani said. “This strong message that zero is the right goal, shared now at the national level, should reinforce our commitment and encourage us to double down on actions that we know work to improve safety, such as implementing the Graduated Driver License Law, designing Complete Streets that accommodate people walking and bicycling, lowering speed limits, and investing more in roadway safety in our most underserved neighborhoods.”

The report’s recommendations include: instituting a Safe Systems approach, a core principle of Vision Zero, which recognizes that because human error is inevitable, system designers and policymakers must design roadways, policies and systems to prioritize safety; more robustly implementing proven safety strategies, such as designing Complete Streets for all road users, and managing speed for safety by lowering speed limits and using technology to influence safe behavior; and ensuring that emerging technologies prioritize safety.

“News flash: these deaths are preventable,” said Leah Shahum, executive director of the national Vision Zero Network, a member of the Road to Zero Coalition. “This report shows that 100 people dying each day — children, parents, grandparents and other loved ones in our communities — is not some inevitable ‘price’ for mobility in today’s society. The truth is that we know what works to ensure safety on our streets, sidewalks and bikeways. And we can and must work toward the only acceptable goal of zero traffic deaths.”

The report recognizes that U.S. roadway deaths are twice the average of other high-income countries, and almost all of these countries have seen greater improvement over the past two decades than the United States has.

As to the question: Why zero?

The new national report asks another question in response: “What level of death on the roads should we as a society accept? How many of our own family members, classmates, neighbors, or people in our community losing their lives to crashes would be considered an appropriate number?”

This national-level report reinforces the importance of Jersey City and others’ leadership in shifting on-the-ground efforts, funding decisions and general culture to one that prioritizes safety over speed.

The two longest-running Vision Zero communities in the nation have seen marked success in their efforts to save lives. Since New York City shifted its approach to Vision Zero in 2014, it has experienced a 28-percent decrease in traffic deaths. In that same time period, San Francisco’s Vision Zero efforts contributed to a decrease of 41 percent in traffic deaths. These positive safety trends are particularly encouraging as the nation’s overall safety has worsened significantly.

The report’s release comes at a time when communities across the nation like Jersey City work to address increasingly hostile street conditions, urban population growth and a mounting desire among the younger generation for car-free alternatives amid a national discussion about the need to rebuild our nation’s transportation systems. New Jersey as a state needs to adopt Vision Zero.

“Nine years ago, I was involved in a completely preventable car crash,” said crash survivor and safety activist Gabe Hurley. “I have since lost my eyesight and have been through a dozen reconstructive surgeries. The driver received a careless driving ticket. Hardly seems fair considering the damages, loss and pain I have endured. In light of this recent report, it’s nice to know that there is a call to action to end driving fatalities on our roads. No family or individual should have to experience the loss or pain as a result of crashes which are preventable. Through the combine efforts of Vision Zero we can reach our goal of zero traffic deaths.”

The basis of Vision Zero is the Safe Systems approach, which the new Road to Zero report calls “a powerful tool for achieving the changes needed to reach zero roadway deaths.” That approach started 20 years ago in Sweden, where traffic deaths have been cut in half without impairing mobility options.

Vision Zero is not a simple slogan or PR tagline; in fact it is far more than a program. As the report explains: “Vision Zero begins with a commitment to focus on the changes necessary to eliminate roadway deaths rather than being satisfied with incremental progress, and goes on to include the creation of a transportation system that accommodates predictable human error without resulting in roadway deaths.

“Adopting the Safe Systems approach involves a fundamental shift from the common assumption that crashes generally happen because of people’s behavior. Instead, a Safe Systems approach assumes that people will occasionally, but inevitably, make mistakes behind the wheel and that the overall transportation system should be designed to be forgiving so that these mistakes do not lead to fatal outcomes. The Safe Systems approach also involves commitment to analyze safety problems, identify changes that bring the best return on investment, and implement these improvements throughout the system to prevent further occurrences. “

Text was provided by the Nikhil Badlani Foundation, which is named for Nikhil Badlani, who was killed at age 11 in a car accident in 2011, when the driver failed to stop at a stop sign. Its mission is to enhance the lives of children through music lessons, scholarships for graduating high school seniors, and traffic safety awareness and education. For more information, visit www.nikhilbadlanifoundation.org.