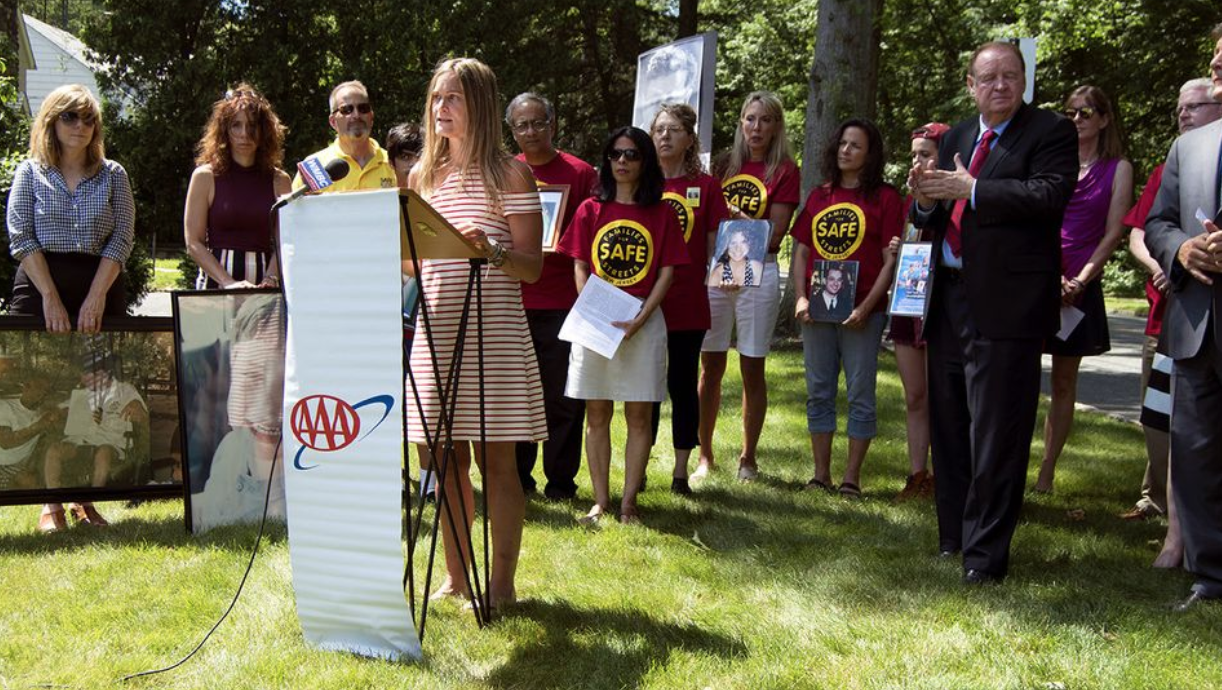 The death of 11-year-old Nikhil Badlani was preventable, his mom Sangeeta Badlani told a a group of traffic safety advocates and elected officials who gathered at the Millburn Free Public Library on Wednesday afternoon.

“He died due to someone’s negligence, and we paid a price — a price of the highest kind,” said Sangeeta Badlani.

The Badlani family lost their eldest son on June 11, 2011, when a motorist ignored a stop sign and crashed into their car in South Orange.

The “School’s Out, Drive Safe” event at the library was designed to remind drivers, bicyclists and pedestrians to use local roads safely this summer.

Its sponsors included the Tri-State Transportation Campaign, the New Jersey Bike & Walk Coalition and AAA Northeast in New Jersey. The 100 days of summer are the most dangerous days on the road, according to the event’s sponsors.

The event officially marked the founding of Families for Safe Streets New Jersey, a local chapter of the New York-based road safety coalition.

Sunil and Sangeeta Badlani and a handful of other New Jersey families affected by traffic violence launched the local chapter.

The Badlanis’ mission has been to raise awareness about traffic safety through education and work with local leaders to change legislation, Sangeeta Badlani said.

In 2015, they also worked with local legislators to pass “Nikhil’s Law,” a bill that emphasizes the importance of obeying statewide traffic laws for new drivers. The law was signed by then-acting Governor Kim Guadagno.

Assemblyman John F. McKeon, a key sponsor of “Nikhil’s Law,” said an important part of the legislative process is working for people you may never meet. Although the group gathered today for a somber reason, this coalition brings him a sense of hope, MeKeon said.

“I stand here very saddened by the lives needlessly lost, represented by their loving family behind us, but I also stand here optimistic with all of you growing leaders,” said McKeon. “As we go forward in the future, these kinds of laws and efforts of all the advocates will prevent needless and senseless carnage.”

Janna Chernetz, director of New Jersey Policy at the Tri-State Transportation Campaign, said although there’s a vast amount of traffic safety organizations statewide, the founding of Families for Safe Streets New Jersey will be an essential addition to this effort.

This new statewide organization will be a comprehensive group that will not only provide support for grieving families, Chernetz said, but will work to create a cultural change.

“So that what happened to their families does not happen to others,” Chernetz said. “Whether you’re a resident in New Jersey, or you’re just driving through — with the goal of, always, zero fatalities on our roadways.”

After dipping to a 20-year low in 2013, traffic fatalities are on the rise. There were 607 road fatalities in 2016, which was an 8 percent increase from the previous year, according to State Police statistics.

There were 166 pedestrian and 17 cyclist fatalities last year, said Cathleen Lewis, director of public affairs and government relations at AAA Northeast in New Jersey. We are sadly on track to have the same statistics this year, Lewis said.

Serio said without the help of grassroots organizations like Families for Safe Streets, the importance of traffic safety wouldn’t be at the forefront of everyone’s mind. He applauded their efforts and extended any future support the county executive could provide.

Judy Kottick, founder of Families for Safe Streets, said she is determined to make traffic safety a global issue, and the goal is to make people realize this is a public health problem.

Kottick launched the New York-based road safety collation following the death of her daughter, Ella Kottick Bandes, 23, in 2013. She explained she was always concerned about traffic safety, but losing a loved one this way is an incomprehensible event.